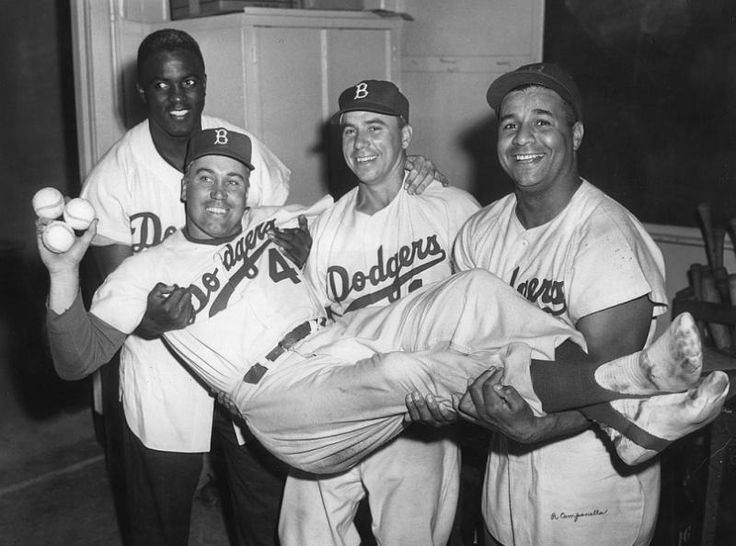 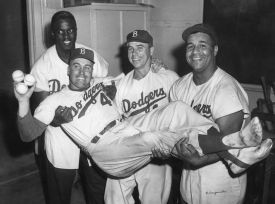 A life is not important, except in the impact it has on other lives.–Jackie Robinson

2018 was a year in which the grimmer aspects of history seemed to encroach upon a once-hopeful present; as a new calendar year begins, many hope we can avoid repeating the errors and injustices of the past. As we hope, let us remember something which at times seems easy to forget: one inspiration at a time, sports have long been integral to the advancement of the human condition.

When the Brooklyn Dodgers literally and figuratively wrapped their arms around a determined and fierce, yet intelligent and self-possessed Jackie Robinson–who’d served in an army which treated him as less than a human in full standing–it helped us reconsider our imaginary boundaries. When John Carlos and Tommie Smith raised their fists on the Olympic podium, it helped us re-think matters of injustice and inequality. When Billie Jean King tired of the bluster of a man whose athletic talents were no match for her own–and gave him a well deserved on-court lesson–she helped challenge our misconceptions about gender and capability. When Magic Johnson–one of the world’s most beloved, admired, and respected athletes–held a momentous press conference, it helped us rethink our assumptions about HIV.

When Roberto Clemente–at the time an MLB superstar–lost his life while spending the holidays in service of those less fortunate, it inspired may of us to consider doing more in our own lives. When Colin Kaepernick–initially, with neither fanfare nor the desire for it–refrained from compulsory salute, then calmly explained the importance of our stated ideals, it helped start a national conversation about the struggle to bring those ideals to life. Kevin Love and DeMar DeRozan have used their platforms to open up about mental and emotional health struggles, shedding light on an under-reported subject and giving voice and representation to many who suffer in silence.

Other inspiring examples include 5’3″ Muggsy Bogues, who overcame much more than just his stature and went on to win a NBA dunk contest; Kurt Warner, the quarterback whose path led him from bagging groceries to the Arena League to the NFL Hall of Fame; Jim Abbott, the pitcher with one hand who threw an MLB no-hitter and gave hope and representation to fans with unusual physical limitations; Venus and Serena Williams, the two home-schooled Compton girls who went on to dominate what was once (incorrectly) seen as a rich kid sport; Mike Piazza, the unheralded catcher who was selected, basically as a favor, in the last round of the draft and became one of the greatest hitters in the history of his position. There’s the very existence of the WNBA, Women’s World Cup, and other professional leagues whose presence has raised the ceiling on so the athletic dreams of so many. Off the field examples include the struggles of Jim Valvano, Stuart Scott, Holly Rowe, and Robin Roberts, whose perseverance through cancer diagnoses have literally inspired millions, and the New York Rangers‘ Ice Hockey in Harlem program, which has broadened horizons since 1987. 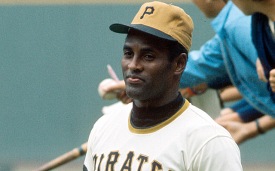 Countless others, past and present, have overcome adversities which many of us shudder to imagine on the way to great heights on and off the field–and have used their platform and good fortune to give back to the greater human community in ways great and small. Often without an ounce of publicity in so doing, they’ve opened schools, founded charities, brought loved ones and strangers alike out of hardship, and spoken on behalf of those whose stories largely go untold.

Perhaps most importantly, it’s not just the pros who make an impact.

Every time players of different hues, nationalities, faiths, and identities come together to compete as brothers and sisters–for millions, for pennies, or for pride; every time ordinary and extraordinary people come together to stand or sit, shoulder to shoulder or limb in limb, to cheer, celebrate, laugh, cry, or scream in support of groups of other humans whose exploits serve as metaphor for so much else…slowly but surely, it brings us closer to a future in which we’re all a bit more empathetic, humane, and conscientious.

The next time you step on a field, put on a coaches’ whistle, turn on the game, head into the stadium or arena or ball park, or even put on a striped jersey–take a second and look around. The world is still struggling to become a better version of itself, and in the compelling human drama which is sport, there’s always an opportunity to help bring folks together in unexpected ways–and, by extension, make the world a better place.

Remember this as you root…and let’s hope 2019 ushers in a world we can all root for together.