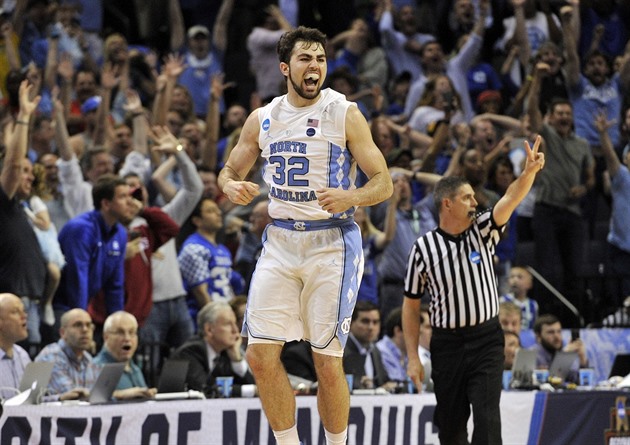 After a Championship Week in which top seeds had a rough time (winning only two of the first eleven of the week’s tournaments) and there weren’t any widely lamented snubs, this year’s March Madness feels both wide open and top-heavy. The Midwest is a tough, sleeper-stacked bracket, headlined by UNC and Kentucky but with a 30-win Houston team as its third seed and Wofford, Iowa State, and other tough outs.

The UNC Tar Heels narrowly lost to Duke in he ACC Tournament’s final game, and many believe they’ll meet again in April. The Heels score 86 points a game, can beat you from outside or in the paint, and they have balance, depth, and athleticism. 6’8″ senior Luke Maye leads them in rebounds and blocks, and is capable of going big on offense when he gets hot. 6’6″ freshman guard Nassir Little has found his groove, and 6’3″ Cameron Johnson–another senior–leads  them in points and steals. The Heels’ main weakness is that they can be erratic on defense, which is interesting given their matchup with the up-tempo Iona Gaels. The Gaels have won ten in a row, and their signature high-scoring style could give the Heels trouble if their shooters get hot…but that’s a very big if, and said shooters would have to get very hot. Pick: UNC

The Kentucky Wildcats are, as usual, a talented team of underclassmen who put it together over the course of the year. They came in second in a tough SEC, lost by a nose to Tennessee in the SEC Tournament, and have gained  coach John Calipari knows how to prepare his players for big games. They can shoot, defend, rebound, and get out in transition, and if they get hot, they can make it to Dayton. The Abilene-Christian Wildcats can also shoot–they hit 38.6 percent of their threes–and Capilari has already made a point of saying he won’t take them lightly; but this is exactly why they’re in trouble. Pick: Kentucky

In a bit of a surprise, the Houston Cougars lost to the Cincinnati Bearcats in the AAC Tournament final; but coach Kelvin Sampson will use it as a teaching tool, and the 31-3 Cougars will come ready to play. The Cougars are athletic, they crash the boards and get up and down the floor, and their only other losses this season were close and late–which could mean they’re properly battle-tested for tournament tension, or if you play them close, the’ll fold. The Georgia State Panthers come in on a five-game win streak, and they shoot almost 40 percent from behind the arc. They also shoot 66 percent from the line as a team, and give up 72.9 points a game–not a recipe for keeping up with the Cougars, or locking things down if it gets close. Pick: Houston

The Kansas Jayhawks ailed to win the Big 12 regular season title for the first time in a decade and a half, then they lost to the erratic Iowa State Cyclones in the title game of the Big 12 Tournament. 6’9″ junior Dedric Lawson is a double-double machine, averaging 19.1 points and 10.3 rebounds a game; and despite the loss of 7’1″ center Audoka Azibuike to injury, the Jayhawks are still a tough athletic team that can hang with anyone in the draw. The Northeastern Huskies are one of the many teams in the draw that shoot well from deep, and 6’5″ senior guard Vasa Pusica–who his seven three-pointers in the CAA final–can score, rebound, and distribute. He and the Huskies will have to be lights-out to win this one. Pick: Kansas

A “D & 3” team, the Auburn Tigers led the nation in threes made and were fifth in steals per game. They heated up in the SEC Tournament, which they won with an 84-64 blowout of the Tennessee Volunteers, and they can beat anyone in the bracket. The New Mexico State Aggies are an experienced, 30-4 team, who hasn’t lost since Grand Canyon beat them with a halfcourt heave on January 10th. They score 78.1 points a game, have played tough defense all year, and they’re in the tournament for the third straight year. Auburn will be in for a test, but if it’s close, the Aggies’ poor free throw percentage might be a factor. Pick: Auburn

The Iowa State Cyclones are a dangerous team, who’s under-performed for much of the year and struggled down the stretch; but they beat Baylor, Kansas State, and Kansas to take the Big 12 Tournament, and if they’re finally clicking, they could be poised for a deep run. Former UVA role player Marial Shayok, a 6’6″ senior, has really emerged as a force. The Ohio State Buckeyes rely on a tough team defense, which they’ll need to come up big to stop a hot Cyclones team. Both teams are good from the free throw line, but Shayok and company are putting it together just in time and could pull away early. Pick: Iowa State

The Seton Hall Pirates were a couple of plays from beating Villanova a second straight time and taking the Big East Tournament. This is their fourth straight year in the tournament, and they’re led by junior Myles Powell, who’s put them on their back for long stretches in recent weeks. The Pirates are a tough team, and they’ll have to step up on defense to slow down the Wofford Terriers–who hit 41.6 percent of their threes, and put up 83 points a game. 6’4″ senior guard Fletcher Magee averages 20.5 a game, and is the best shooter on a sharp-shooting team. This one will be fun, should be close, and could go either way. Pick: Seton Hall

The Utah State Aggies play a hounding team defense, score 79.2 points a game, and hit almost 75 percent of their free throws as a team. They’re on a serious roll right now. The Washington Huskies took first place in the Pac 12 Conference, in one of said conference’s weaker seasons in recent memory, and have struggled down the stretch–including getting thumped by Oregon in the conference tournament. 6’8″ senior Noah Dickerson is a big man with great low-post moves from a strong base, and 6’5″ senior Matisse Thybulle leads them in blocks and steals. The Huskies aren’t to be taken lightly, but they’ll have to right the ship to take down the streaking Aggies. Pick: Utah State

The bracket’s biggest sleeper is: Iowa State. They’ve been up and down all season, but if they stay hot, they can be a real problem.

Upset alert: Seton Hall. The Pirates are tough and battle-tested, and Wofford will need those shots to drop if they want to advance. This bracket is filled with anyone-can-get-it sleepers.

The best player you might not have heard of is: Fletcher Magee. He’s big, he’s experienced, he’s fearless, and he can shoot. Also Marial Shayok, who was a depth guy for UVA during its recent resurgence and is now the Iowa State Cyclones’ best player.

Who makes the Final Four? UNC. If they defend even reasonably well, the Heels might be the team that wins it all. Kentucky’s leading scorer and rebounder, PJ Washington, spent much of this week in a walking boot due to a foot sprain; it shouldn’t stop them from winning their first game, but will certainly affect how far they go.