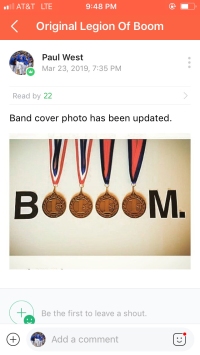 No matter the level of competition–from youth sports to adult recreational leagues–a LOT goes into running a sports team.

As a captain, you have to get a team of busy adults to work around their schedules and come together for a common goal, whether it’s a big trophy or just bragging rights.

As a coach, you have to get a team of busy student-athletes on the same page despite homework, family events, other extracurricular activities, and plain old kid stuff. You’ve also got to inform parents of everything they need to know, to make your job easier and help enrich your young athletes’ experience.

Here in New York City, I’ve been both a middle school baseball coach and the captain of a few rec-league sports teams. I’ve recently discovered BAND, and I’m happy to report that it lets you do all these things and more.

BAND combines the best aspects of other texting and social media platforms you may have heard of: organization, event planning, one-one-one or group communication, and audiovisual sharing. It has a pleasant yet professional feel, it’s simple and intuitive to navigate, and allows you to bypass long-distance and messaging rates as you operate within its miniverse.

So you and some friends have decided to put a team together for an after-work league. Whether it’s softball, bowling, flag football, or trivia, you’ve got to do two things first and foremost:

BAND has a calendar function so you can post the team’s schedule, and an RSVP function so you know who’ll be there at kickoff, tipoff, first serve, or first question. The RSVP function requires activation, so make sure you turn it on–otherwise, you will be able to see when members view an invitation or calendar entry, but they won’t be able to officially declare their attendance. You can make an event recurrent, say, for a weekly practice; and the app lets you set event reminders for members, and export your BAND calendar to Apple or Google calendars. For coaches, the calendar function lets you share the game schedule with parents, players, assistant coaches, and administrators; there’s a group chat function, so you and the team can talk strategy & lineups or just get each other pumped up; and the ‘shoutout’ option lets you accentuate your responses with emojis.

BAND allows you to create polls, a useful tool for getting the group’s opinion on any number of subjects. You can vote on a venue for a team celebration; vote on team colors or a pregame meeting spot; ask if anyone would want to hold an extra practice; or even do something frivolous and fun, like a favorite pro player–or who’ll take the Stanley Cup this year.

BAND also lets you set up separate chats, which can really come in handy. Let’s say you want to throw a surprise party for a teammate’s birthday or significant life event, or maybe present them with an MVP award; you can’t discuss it on the main chat without spoiling the surprise. But you can create a chat group called, for example, ‘captain’s birthday’ or ‘bridal shower,’ and the guest of honor won’t know until you want them to! You can sort out logistics, gifts, timing, and even diversionary tactics so the guest of honor won’t know until you want them to. The separate chats are particularly helpful for coaches, as you can control the flow of chatter and information and direct everyone what only they need to know. A parents-only chat can be used to set up carpools, discuss matters of discipline or playing time, or maybe even arrange a parent-and-guardians meeting. Pitchers and catchers can have a separate chat to strategize, a quarterback and their receivers can have their own chat to discuss routes and reads, and you can adjust each chat’s permissions to control who participates and make sure they’re only sharing appropriate material. This way, you can give them their own safe space within the app, while still establishing limits and guidelines.

Bands come with flexible and easily managed privacy settings. You can make your band publicly searchable, and allow people to just join in when they find it. You can also set it as invitation-only; this lets you keep opposing rec teams from crashing your strategy sessions, and keeps uninvited guests out of your players’ chats. Your identity, and those of the people in your care, are only available to the extent you’d like them to be.

Win or lose, one of the best things about playing on a team is the memories. There are moments you share, on and off the field, which will stay with you for the rest of your life: a game-winning single, that first win after a long slump, a senior’s last game before graduation, or a team outing or birthday party. BAND lets you upload photos and videos to share with your bandmates, which means you can share special moments and memories after the game and season are over. This can apply to something as mundane as a copy of the new team jerseys, or as epic as the aftermath of a title-winning hit. You can even share your own moments with the squad, such as this beautiful sunset I saw on my way home from practice. Bandmates can like, comment, give a shoutout, and download the photo themselves. Once you create a post, you can see who’s read it, pin the most important ones to the top of your feed, and organize your posts using hashtags. If you have something in mind you’d like to post in the future, you can pre-schedule a post for when you think it’ll have the best impact.

Another thing you’ll appreciate about BAND is its design. The app’s layout is memorable but unimposing, and its features are intuitive and user-friendly. It doesn’t take too long to navigate its features, which is good for technophobes and technophiles alike. It’s not simply text-driven or picture-oriented; it’s audiovisual, allowing you to communicate both visually and verbally. This is helpful, because any team–whether it’s composed of adults or kids–is likely to have folks who prefer various learning and communication modes. Whether you prefer to work through images or words, BAND lets you get your point across to the rest of your team. Here’s a screenshot of the page I created for my flag football team–yes, we came up with the name before that other team you may have heard of!

Joining band is as easy as going to https://band.us/ and signing up with either your phone number or email. You can install or use it on Android, iOS, and desktop, and set up your notifications to your liking. You can set up a co-admin for your band, be it a co-captain or assistant coach, and decide what degree of control they have over group settings.

BAND is a well-blended combination of visual and textual flexibility. As a captain or coach, it lets you organize, coordinate, delegate, motivate, and ideate–with room for creativity as you go.